From Wikipedia in 12-2020 (dark green text is Myrons, dark blue is Wikipedia):

Puch is a manufacturing company located in Graz, Austria (Former Austria-Hungary). The company was founded in 1890 by the industrialist Johann Puch and produced automobiles, bicycles, mopeds, and motorcycles. Since 1934 Puch has been a subsidiary of the large Steyr-Daimler-Puch conglomerate. 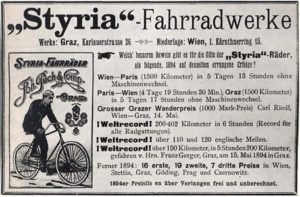 Johann Puch:From 1889 Johann Puch (1862–1914) worked as an agent for Humber vehicles and manufacturer of Styria safety bicycles in a small workshop in Graz.

In 1890 he founded his first company, Johann Puch & Comp., employing 34 workers. Not long after Hans Renold invented the roller chain in 1880, Johann Puch invented the safety bicycle in 1880, and Gottleib Daimler invented the motorcycle in 1885. Styria safety bicycles were chain driven, allowing the rider to sit closer to the ground. Traditional bicycles at the time were the direct drive big wheel type. Those were more dangerous and difficult to ride. Cyclists like Josef Fischer, winning the first edition of Paris–Roubaix in 1896, popularized Styria bicycles which were even exported to England and France. This 1894 ad lists 3 world records set by “Styria” safety bicycles. By 1895, Puch already employed more than 300 workers producing about 6000 bikes a year. 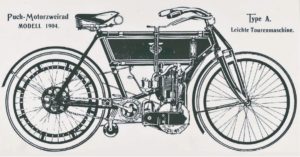 The main production plant, later called Einser-Werk, was constructed in the south of Graz, in the district of Puntigam. Production of engines was started in 1901 and cars followed in 1904. The first motorcycles were bicycles with stronger and longer frames. So the first Puch moped was the 1904 Puch A light touring motorcycle 254 cc. In 1906 the production of the two-cylinder Puch Voiturette automobile began and in 1909 a Puch car broke the world high-speed record with 130.4 km/h. In 1910, Puch is known to have produced sedans for members of the Habsburg imperial family.

In 1912 Johann Puch went into retirement and became the company’s honorary president. In that year the company employed about 1,100 workers and produced 16,000 bicycles and over 300 motorcycles and cars annually. Puch automobiles were successful at the pre-war Österreichische Alpenfahrt rally and from 1913, the four-cylinder 38 PS (horsepower) Type VIII Alpenwagen was manufactured in Graz. During World War I, Puch became an important vehicle supplier to the Austro-Hungarian Army.

With the collapse of the Austro-Hungarian empire following the War, the market for automobiles shrank and production was discontinued. However, again in 1919, the new Type XII Alpenwagen was developed.

In 1923 the Italian engineer and FIAT agent Giovanni Marcellino is said to have been sent by the banks to wind up the Puch factory in Graz. Instead of which, within a few weeks he had settled down to live in the town, designing and then producing a new version of the split-single. Taking his inspiration from industrial counter-piston engines, the new engine benefited from the improved breathing of the Italian original, to which he added asymmetric port timing. In 1931 Puch won the German Grand Prix with a supercharged split-single, though in subsequent years the split-singles of DKW did better.

Like all enterprises of its kind, the Puch production plants had to change to arms production during World War II. The existing capacity was insufficient, therefore a second plant was constructed and opened in 1941 in Thondorf, Graz. In the three original assembly halls, luxury vehicles for the American market were produced. Steyr-Daimler-Puch is one of the companies known to have benefited from slave labor housed in the Mauthausen-Gusen concentration camp system during World War II. Slaves from the camp were used in a highly profitable system used by 45 engineering and war-effort companies, and amongst them Puch had an underground factory built at Gusen in 1943.

During the period immediately after the war, late 1945 to 1947, the factory was requisitioned and run by the British Army (R.E.M.E.) who used the facilities and what remained of the workforce for the repairing and servicing of British and American military vehicles. In 1949, an assembly cooperation agreement was signed with Fiat in Turin. The 1950s to the mid-1970s saw a sharp increase in production of motorcycles, bicycles and mopeds. Even though Puch was a part of Steyr-Daimler-Puch, it still manufactured products under its own name, as well as for Steyr-Puch and other companies. Puch gave up racing in the 1950s and split-single production ended around 1970.

1950’s-70’s Puch Mopeds: From 1954 to 1981 Puch produced the successful MS50 moped, with a stamped sheet metal frame, telescoping fork front suspension and swinging fork rear suspension. It was a limited-power 50cc fan-cooled two-speed grip-shift. MS stands for Moped Schalenrahmen (sheet frame moped). Most others had welded tube frames. It had rear suspension when most others had hard tails. By 1957 almost 110,000 were made, and in total 1,053,433 MS50 mopeds were produced. In the 1960’s a Puch MS50 variant was sold in the USA, re-branded as Sears Allstate.

Puch Scooters: The late 1950s saw strong sales of the Puch 125cc two-stroke single motor-scooters, which had three gears shifted from the left twist-grip. These machines developed a reputation for reliability and were popular for daily commuting, providing good weather protection and ease of use. In this role their moderate performance, with a top speed of around 45 mph, was not a problem. Later models had a 150cc engine and foot-operation, giving better performance of 6 hp instead of 5 hp but retaining the three gears.

The time has come

1970’s-80’s Puch Mopeds: In 1969 the beloved Maxi was born. It had the schalenrahmen (stamped steel sheet frame) with integral gas tank, like the MS50, but with smaller 17″ wheels instead of 19″, and a new horizontal-cylinder engine without fan cooling.

Some Puch Maxi’s were sold in the US in 1972-75, but not many until 1976 when US laws changed welcoming mopeds. That’s what “the time has come” means. Later Maxi’s had many variants. Some had Maxi in their name and some did not.

1986-1987 Puch: In the late 1980s, the company was being squeezed out by competition from Japanese motorcycle makers. This was happening to all European motorcycle manufacturers. In 1987, a massive restructuring of the company led to the end of the production of two-wheelers in Graz. The company’s technical know-how was always better than its marketing and commercial success. Puch had developed the Super Maxi, low emission and high torque, with a catalytic exhaust, an improved right-side air filter, and an improved cylinder with 4 transfer ports and a boost port. Puch had developed the advanced Maxi Plus (Austro-Daimler), with help from Ferdinand Porsche. It had reverse-cut gears and other subtle technical improvements. Sadly, after Puch closed it’s doors in 1987, the moped production equipment was sold to Piaggio in Italy and Hero Motors in India and Turkey.

1988-1997 Piaggio-Puch: The Puch motorcycle company was sold to Piaggio, maker of the Vespa, in 1987 and still produces bikes under the name Puch. Piaggio produced the Puch Super Maxi remakes in Italy from 1988 to 1997. Some models had a catalytic converter for low emissions. In 1994 Piaggio sold the Puch rights and engine production equipment to Manet in Slovakia. In 1998 Piaggio destroyed the molds and equipment for making the Maxi.

1994-2006 Manet-Puch: Manet bought the engine production line in 1994 from Piaggio, and moved it to Povážská Bystrica in Slovakia. They developed their own frame and moped, called Manet Korado. The first engines were of low quality, but they learned quickly. US versions were called Puch Korado and made from 1995 to 1999. New 50cc emissions laws came out for 50cc motorcycles, mopeds and scooters made after 2006, causing most makers to cease production. In 2006 the factory at Povážská Bystrica stopped moped production completely. The company Povážské Strojárne Motor Manet transformed into VVED, and produced agricultural light equipment after 2006. See more in the Manet-Puch section.

The Einser-Werk, Puch’s first production plant, shut down in the early 2000s. The historical assembly-hall was declared a protected industrial monument. When Graz became European Capital of Culture in 2003, a Puch museum was opened in one of the former assembly halls. 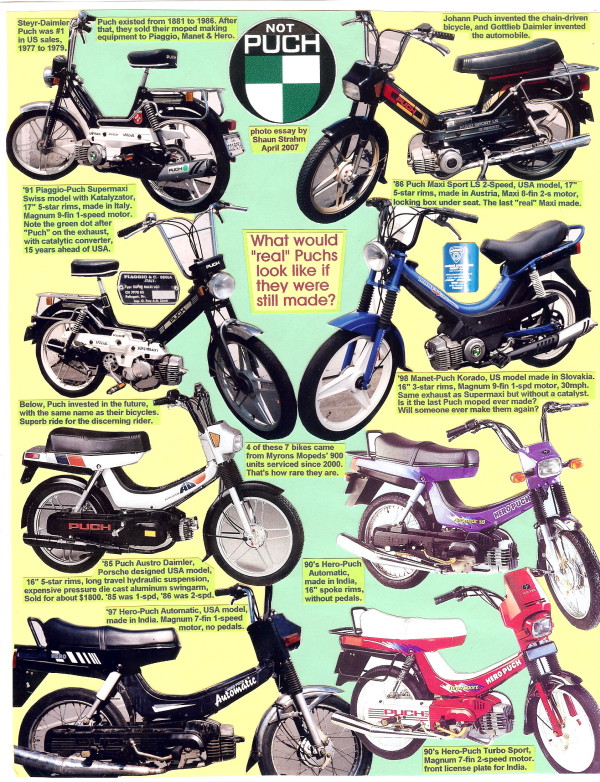