⇐ purple are links
numbered are below

There are many Italian motorcycle names. Wheels of Italy has 543 motorcycle sections.
These here are the Italian brands that sold mopeds new in the USA, plus a few others.
The bike identity (brand, maker, model, year, version) helps to know the parts identity.
Most export models are “re-branded” and the true identity is concealed.

Arciero is not in the Wheels of Italy Encyclopedia, but Italtelai is. Italtelai began in 1972, and means “Italian frames”. They made chassis for Arciero, Bianchi, Pacer, Portofino, Snark, and other US export models. They all used Motori Morini Franco engines and Spisni Franzoni forks. 1970’s engines were Morini MO-1 or MO-2. 1980’s was Morini M1.

Aspes      made in Italy by Italvelo     Minarelli V1 engine

Moto Aspes built quite successful 50 to 125cc sports bikes and offroad racers from 1967 to 1982, with mostly Minarelli or Sachs shifter engines.

BETA was formed in the early 1900’s in Florence Italy, by Guiseppe Bianchi, a famous bicycle racer and entrepreneur. Originally it was called “Societe Guiseppe Bianchi”, and made bicycles. Later in the 1940’s when production of motorcycles began, the company was renamed “BETA”, after Bianchi, Enzo and Tosi, Arrigo, the chief officers at the time. Beta is still making motorcycles, mostly off road trials bikes.

This is a collapsible mini-moped with pedals. It has tie-rod steering and a front swing arm. This one was serviced at MM in the mid-2000’s.

Graziella is the name of a folding bicycle line made by Carnielli.

Moto Graziella is the name of a their motorized folding bike.

Moto G is the name on the gas tank.

Chris Cycle    made in Italy by Wilier    Morini engine

Wilier Triestina began in 1906 in Trieste, Italy as Ciclomeccanica Dal Molin. Craftsman Pietro Dal Molin from Bassano was fascinated by bicycles and the speed with which they were gaining popularity in daily life.  He purchased an almost unknown English brand, Wilier, and began producing bicycles. Wilier has produced winning racing bicycles for over 100 years. Here is the full story from wilier.com. 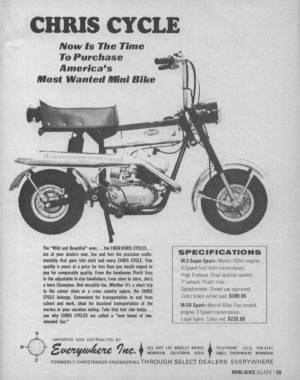 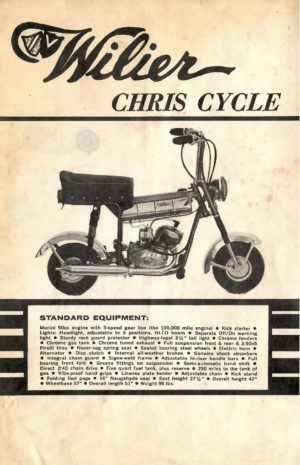 Vee’-lee-air: Although “Wilier” was originally a early 1900’s English bicycle, it is also W.I.L.I.E.R. Both Wilier and Triestina were inspired by Italian patriotism following the World Wars. Wilier is an acronym. W is an abbreviation for the word Viva, which means “Long live”, beginning the phrase: W l’Italia LIberata E Redenta – Long live Italy, liberated and redeemed. It is pronounced /Vee’-lee-air/. from Wheels of Italy

Motocicli Wilier produced small motorcycles and mini-cycles mostly 48cc in the 1950’s and 60’s. Here is the Wilier gallery on cybermotorcycle.com.

Chris Cycle was an American brand of mini-cycles, made in Italy by Motocicli Wilier in the 1960’s, imported and sold by Everywhere Inc. in Monrovia CA, near Los Angeles. 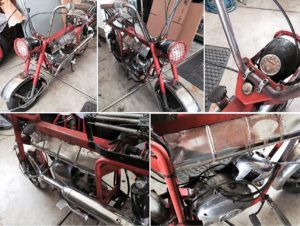 FMB Telaimotor Fabbrica Motocicli Bologna Telaimotor (Bologna Motorcycle Factory that makes motor Frames) was one of the myriad companies in and around Bologna, Italy through the ’50s to the ’80s that specialised in building their own chassis. FMB was based at 38 Via Fossolo, but sadly now there’s a company building lab equipment instead.

FMB should not be confused with FBM (Fabbrica Bolognese Motocicli). FMB made chassis and nearby FBM made engines.

General TE   made in Italy by Moto Bimm   Minarelli V1-L

Most Generals are made in Taiwan by Jui Li. This one is different. It is 100% Italian. 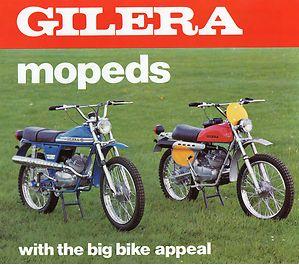 Gilera  made in Italy by Piaggio   Piaggio

Gilera was founded in Arcore, Italy in 1909 by Giuseppe Gilera. After four decades of making motorcycles, in the 1950’s Gilera had the technical expertise to win the 500cc motorcycle world championship 6 times in 8 years. In 1969, Gilera was purchased by Piaggio.

The Vespa Grande, a US model, is 80% the same as a Gilera cbA, a Euro model, both made by Piaggio. The lights, electrical wiring, and long seat are the main differences. 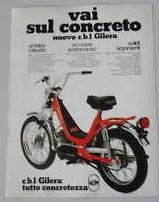 These models are shown for information purposes. Myrons does not have parts for these, other than things that were on US model Vespa Grandes. Some of those parts have become scarce.

ITOM stands for Industria Torinese Meccanica. They made quality 50 to 125cc motor bikes from 1948 to 1975 near Turin (Torino), Italy.

The 1970’s Itom 1-speed automatic motor with horizontal cylinder is similar to a Morini MO1, but is different.

Here are both engines, side by side, for comparison.

Lambretta       made in Italy by Innocenti     Innocenti 1-spd engine

Innocenti was a steel tubing factory formed in 1922 by Italian businessman Ferdinando Innocenti. In 1947, after the factory was heavily bombed in WWII, they switched to producing motor scooters with the brand name Lambretta. The design was inspired by 1940’s Cushman scooters made in Nebraska USA.

From Wikipedia: Lambretta is the brand name of a line of motor scooters initially manufactured in Milan, Italy, by Innocenti. The name is derived from the word Lambrate, the suburb of Milan named after the river which flows through the area, and where the factory was located. Lambretta was the name of a mythical water-sprite associated with the river which runs adjacent to the former production site.

In 1972, the Indian government bought the machinery of the Milanese factory, creating Scooters India Limited(SIL) in order to produce the Lambro three-wheeler under the name Vikram for the domestic market. Lambretta scooters were also manufactured under licence by Fenwick in France, NSU in Germany, Serveta in Spain, API in India, Yulon in Taiwan, Pasco in Brazil, Auteco in Colombia and Siambretta in Argentina. Innocenti S.A. (also known as Lambretta Consortium) based in Lugano, Switzerland is the owner of the international trademark Lambretta and has licensed the brand throughout the world.

Lem     made in Italy by Lem     Minarelli and Morini engines

Lem Motor srl was founded in 1974 by Vincenzo Marasco, in Calderara di Reno, Bologna, Italy. Lem produced small motorcycles with mostly 50cc and 65cc Minarelli and Franco Morini engines. In the 1980s the majority of models were for junior MX and trials. Later the company partnered with Italjet, and in 2017 produced a variety of pitbikes and minimotos up to 150cc along with electric motorcycles.

Maico is a trade name used by importer/distributer M.P.I. A true Maico is German-made, usually a motocross or trail bike. Maico mopeds are made by Italy by Moto Bimm.

Moto Bimm was founded in 1965 by Jose Becocci in Florence, Italy. They produced off-road motorcycles from 50 cc through 125 cc using Minarelli engines. Later there were sport bikes and mopeds with various small engines. The Maico moped is one, famously known as the Billo in Italy. Sometime in the 1970’s Moto Bimm became Motori Bimm and then Bimotor, which lasted until 1980. Note that “Moto Bimm” is not Moto BM (Bonvicini Marino) and “Bimotor” is not Motobi (Benelli). The names are all similar.

Motobee    made in Italy by Testi   Minarelli V1

Many of these bikes seem to be from Maine. They have a unique gas tank. Otherwise the Motobee RS100 is the same as a Gitane Sport. They are both made by Testi. See Testi/Gitane. The components are all the same as Gitane, except the Motobee speedometer is CEV, not Huret.

There is another bike called Motobi, made by Benelli. This is not that.

Moto Bimm (Motori Bimm, later Bimotor), founded in 1965 by Jose Becocci in Florence, produced off-road motorcycles with an engine displacement from 50 cc through 125 cc using Minarelli engines. Later there where sport motorcycles and mopeds with engines that were manufactured by other companies offered in their lineup. (from Wheels of Italy Encyclopedia)

US model mopeds made by Moto Bimm were branded Maico, Gadabout, and General TE.

Moto F.B.M.  made in Italy by Moto FBM   FBM engine

Testi and Sachs helped Minarelli: Since 1933 Testi was a bicycle company owned by Umberto Testi. Umberto’s son Erio Testi worked in his fathers bicycle factory. In 1953 Umberto sent his son Erio Testi to Austria to visit Fichtel and Sachs, and learn about small two stroke engines. After Erio returned, he was hired by Moto FBM, and transferred the Sachs two stroke moped engine manufacturing knowledge to his friend Vittorio Minarelli. In 1954 the Pettirosso (red breast) was born, a 50cc 2-stroke 2-speed cable-shift engine, destined to become the engine for most popular mopeds in Europe, and later the P3 3-speed version.  see https://it.wikipedia.org/wiki/FBM_(azienda)

Moto Meteora began in 1953 in Monteveglio, Bologna, Italy. They made lightweight motorcycles with 50 to 125cc OMS and NSU engines. In the early 1980’s they made mopeds with Franco Morini engines, such as the Motomarina Sebring. They closed around 1990.

OMER (Officine Meccaniche Emiliane Reggio) made motorbikes and three wheeler pick up trucks from 1966 to 1981.

From Sheldons Emu: Based in Reggio Emilia, near Modena, the company built the Tanga and Skipper, conventional mopeds Vivo, Zoom, Mini Daytona, Mini Vallelunga Cross, and a folding minibike for MV-Agusta.

The Silver Foxi, made by Testi,  is one of four marketing names made by United Moped. The others are “Foxi GT” by Sparta (Holland), “Foxi Deluxe” by KTM (Austria) and “Foxi 47” by Jui Li (Taiwan). The Silver Foxi is a monotrave frame, compatible with the Gitane Cricket, and the Testi Cricket.

Velomec is a trade name that is not on any list (except this one). The maker Italvelo is not in the Wheels of Italy Encyclopedia. See Bianchi. Italvelo makes Aspes, Italvelo, Bianchi, Snark, Velomec mopeds.

West Wind   made in Italy by Spisni Lino   Morini MO-1

West Wind is a trade name made by the importer/distributor, American Moped Inc (AMI), who also imported the Indian 4-stroke, (before Derbi/Leone). It has a “tubone” style frame (thick tube with gasoline inside).

Yankee Peddler mopeds are mostly in the New England area of the USA. The US importer/distributor was Besser Marketing Assoc?, in Rhode Island?.

FMB Telaimotor Fabbrica Motocicli Bologna Telaimotor (Bologna Motorcycle Factory that makes motor Frames) was one of the myriad companies in and around Bologna, Italy through the ’50s to the ’80s that specialised in building their own chassis. FMB was based at 38 Via Fossolo, but sadly now there’s a company building lab equipment instead. FMB should not be confused with FBM (Fabbrica Bolognese Motocicli). FMB made chassis and nearby FBM made engines.