Gadabout (UK)       made in England by Phillips

The word “gadabout” means wanderer. The Phillips Gadabout was a popular 1950’s – 1960’s English moped. That kind of Gadabout moped is not included here.

Moto BM was started by Mario Bonvicini in 1950. BM first made bikes with Ilo 125 -175cc engines, then later with Morini and Minarelli engines 50-125cc.

Holiday Rambler: One of the earliest Gadabout moped sold in America was the 1978 Gadabout MK IV by the Holiday Rambler Corporation, made in Bologna, Italy by Moto BM (Bonvicini Marino). It was originally sold on the back of Holiday Rambler RVs to be ridden around campsites.

Stickers did not last long

Almost all of them have no stickers left, because they cracked and fell off. That was the only thing that Gadabout owners were not glad about.

Robcor: At some point later, the Robcor Inc. in Plymouth, Virginia USA sold Gadabouts, both two and three wheelers, in 1979-80. 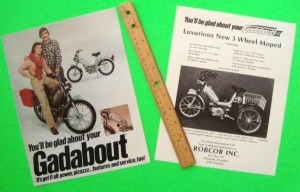 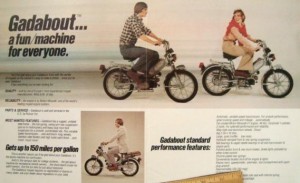 The green and silver 1980 Gadabout is the same bike and same paint colors as a 1978-79 Pryer Gadabout.