Welcome. The three major American made mopeds from the 1970’s and 80’s were AMF Roadmaster with McCullough or Minarelli engines, Colombia Commuter, Open Road and Mopet with Sachs or Solo engines, and Murray mopeds with Puch engines. They have their own sections. Here in this section are all the others. 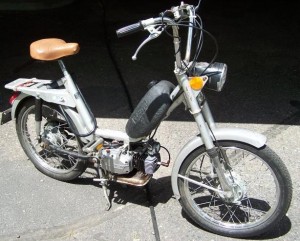 Stuart Pivar was an American inventor in New York, New York, who designed, built, and patented this three wheeled moped in 1980. Then American Microcar Inc, in Farmingdale New York mass produced them. Some were electric but most came with a Minarelli V1 engine with pedals. 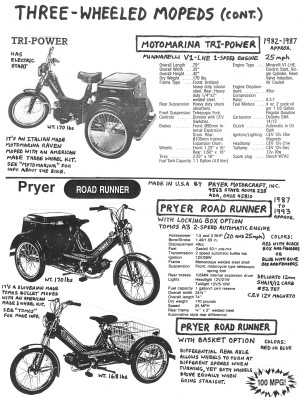 Pryer is a trade name made up by Pryer Motorcraft, 4563 State Route 235, Ada Ohio 45810. Pryer is mostly known for their three wheeled mopeds (trikes). At least three different two-wheelers have been used to produce three-wheelers. Puch (Austria), Tomos (Yugoslavia), and Moto BM (Italy). The Italian (same as Gadabout) two wheel bikes were made in Bologna Italy, by Moto BM, and then converted into three wheelers in Ohio USA. Later Italian bikes were the Motomarina Raven kind. Various options were offered.

1978 Pryer Gadabout
made by Moto BM 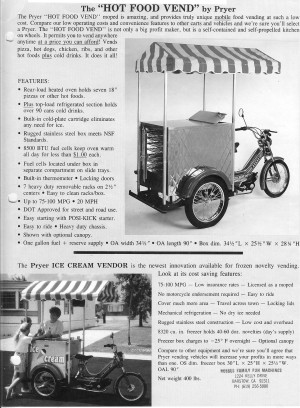 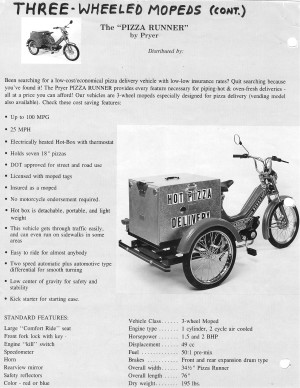 After late 1992, some 1992-93 Tomos two-wheelers were converted into three-wheelers by Pryer, in the USA. The seat and everything behind it, the swinging rear frame, axles, brakes, wheels, etc, was American-made, pretty much. Everything forward of the seat was Slovenian-made, pretty much. There were different choices for the cargo box. Hot food, cold food, flat bed, or a small frame version with either a basket or a locking box. Because a Tomos automatic moped starts easy, with a backwards kick, even stationary with the rear tires on the ground, they make the best choice for a heavy-cargo trike. Other moped trikes with Puch or Minarelli engines must first get the trike moving forward above 7mph to start the engine. 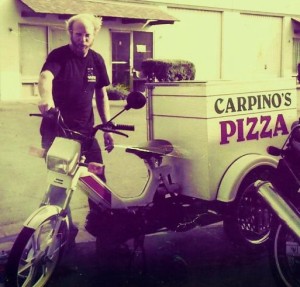 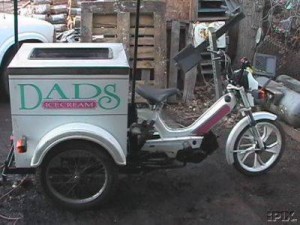 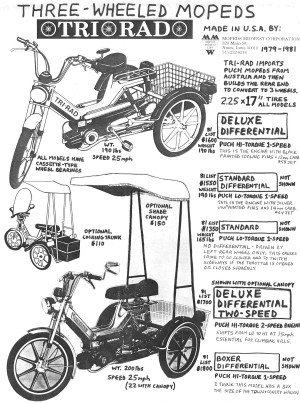 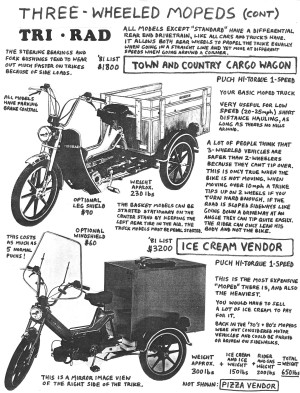 At the time these were considered bicycles, so they could motor to the beach, turn the engine off, and pedal down the boardwalk selling ice cream or pizza. Too bad the deluxe three wheeled moped, with differential drive, and hot/cold food box, costed more than some automobiles! That was the only thing that was not three times as rad.

The Whizzer bicycle engine was first produced in 1939 by Breene-Taylor Engineering, a Los Angeles-based manufacturer of airplane parts. By 1942, sales of the engines had not been entirely successful, having sold only about 2500 units. The Whizzer operation was then sold to Dietrich Kohlsatt and Martin Goldman.

By 1943, World War II was well underway, and Whizzer Motors were forced to lobby the United States Government for the right to continue production of what was argued to be a great way for defense workers to travel to and from work.  In 1948, Whizzer sold its first pre-assembled motorized bicycle, the “Pacemaker”. 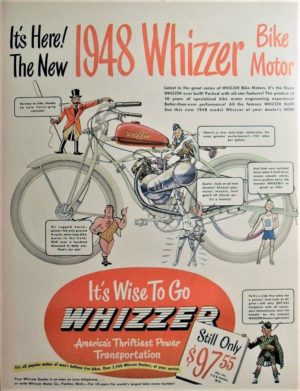 1948 Whizzer ad for the bike motor kit, price $97, 2½ horsepower. It says “Fits all popular makes of mens ballon tire bicycles. Over 3500 Whizzer dealers at your service.” 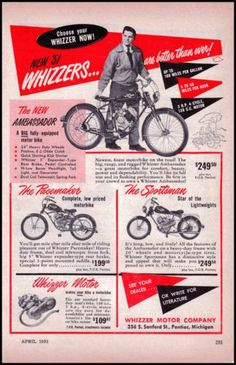 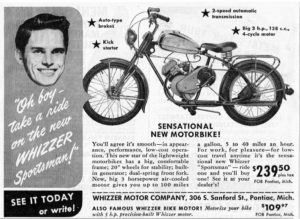 1952 Whizzer ad has the motor kit for $109,
and the Sportsman bike for $239, with 138cc
3 horsepower two-speed automatic motor.
From Whizzer Motor Company,
306 S Sanford St, Pontiac Michigan.
Note that the ad says 20″ wheels, which means the rim size. The tire size was 24″ outer diameter.

May 1948: Dietrich Kohlsaat announced that they had sold 150,000 Whizzer engines. The company had over 12 dozen warehouses nationwide that supplied 3500 dealers.

Whizzer announced the Model “J” engine, which had a chrome-plated exhaust pipe and fittings, a new, more-reliable Carter carburetor, and motorcycle-type twist-grip controls. Whizzer sold about 51,000 Model “J” motors at a cost of $97.55.

June 1948: Whizzer introduced the “Pacemaker,” which the company referred to as the “only complete motorbike.” The bike came with the Model “J” engine already attached to the frame and ready to run. The “Pacemaker” retailed for $199.50

Sep 1949: In order to keep pace with its new competition, Whizzer released the Model “300” Motor. This new engine had 7/8 in. valves, a more efficient combustion chamber, better cooling, and a higher compression ratio. These changes resulted in a 3 hp engine that could reach speeds of 40 mph. Whizzer sold about 15,000 Model “300” motors at $109.97 each.

Note that the displacement (138 cc) remained the same on the more powerful “300” motor.

1951: Whizzer released the “Ambassador,” a motorbike similar to the “Sportsman” but with a full-size frame, larger tires, and greater overall length. The “Ambassador” was the top-of-the-line, with a gloss black finish, ivory trim, and chrome-plating. The Ambassador sold for $249.50, making it Whizzer’s most expensive product.

1952: The company introduced its last major motorbike engine, the “700.” This motor was in many respects similar to the “300,” but it included a new carburetor, a sealed-beam headlight, and a taillight.

1947 Whizzer Luxembourg
(made in Europe)

Whizzer Motorbike Company changed names to become Whizzer Industries, Inc. and began to expand into other areas of production. Whizzer Industries produced childrens’ toys and wagons as well as windows and sliding doors. The company continued to sell parts for Whizzer engines and bikes until 1965, but times had changed and the Whizzer was no longer king.

1997-2009: Whizzer motorized bicycles were revived by the “new” Whizzer Motorbike Company, 4751 Glenn Curtis, Addison Texas 75001. They were reproduced in Taiwan by Polar Motor Co. Ltd, in the same style and quality of the originals but with technological improvements. The new side-valve “flathead” motors had the same displacement, 138 cc. But the power and speed were less, 1.95 hp instead of 3.0, and 25-30 mph instead of 35-40. Here are the new Whizzer models, condensed from whizzermotorbike.com:

1999 Whizzer ID
made in Taiwan by
Polar Motor Co Ltd 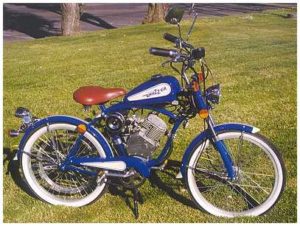 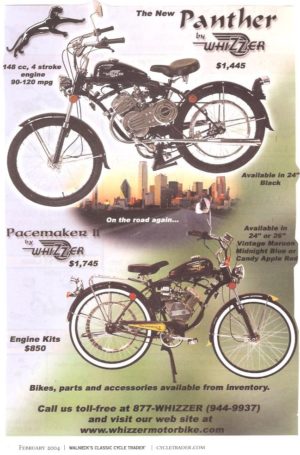 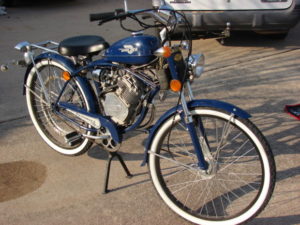 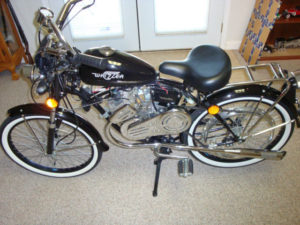 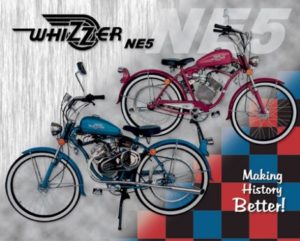 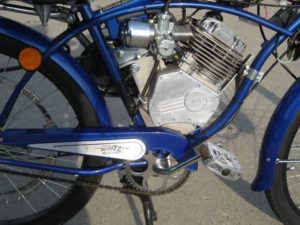 In 2005 the engine was improved. One improvement visible in photos was bigger aluminum cooling fins. Notice how you can’t see the right rear cylinder stud on a 2005-on, but you can on a pre-2005. The deeper cooling fins cover it. 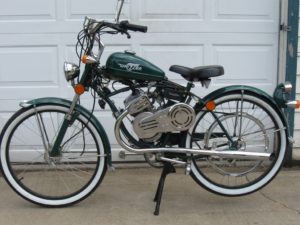 Myrons Mopeds does not have any actual Whizzer parts, other than things that are the same as other mopeds. Use Woodstock Whizzer for most parts requests.

Other Motorbikes with Whizzer Engines

Their senior technician Ralph Westman has over 50 years experience. They do sales, service, parts, restorations, and performance modifications.