Officine Meccaniche Zanetti in Bologna Italy made 50cc motorcycle engines and motorized bicycles from the early 1960’s to the late 70’s.

Bicizeta: In the 1960’s Zanetti produced the popular Italian motor bike Bicizeta (bee-see-zet-uh) with the Zanetti C50/2 front engine. It could be pedaled or motored, or both. It folded in half to fit easily into most car trunks. The gas tank is above the engine below the handlebar. The headlight is molded into the gas tank.

Pumita: From about 1963 to ’72 the Bicizeta was remade in Cordoba, Argentina by Lujan HNOS S.A.I.C. It was called Pumita (little puma). Some versions had less chrome. Some had different controls. 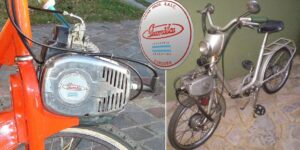 There are no photos or flyers available. So which Bicizeta version is unknown.

Safari Scat: In 1968-69 MBI contracted MZV of Bologna Italy to produce mini-bikes and mini-cycles using the Zanetti engines. They were given the brand name Safari Scat. Apparently the Safari Scat mini bike line of the early 1970’s included or became street legal full size mopeds with off road tires and fenders by around 1979. There are currently no pictures or details of those early Safari Scat mini bikes. There is only this 1979 Safari Super Scat, a top tank moped with Minarelli V1 engine. 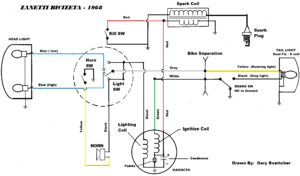 the green engine wire must go to ground to have spark

Safari Rovet: In the early 1970’s MBI went in partnership with an Italian engineer and started their own bicycle manufacturing company, named Rovet. In 1975 Rovet made the Safari Rovet, using the Zanetti front engine. Unlike the Bicizeta that was a folding step-thru frame, the Rovet was non-folding. It produced 1 hp, went about 19 mph, and was DOT approved for US streets. 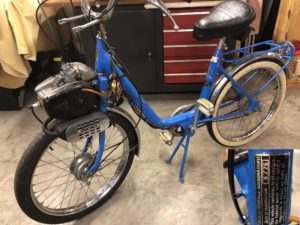 Safari Fox: Not long after the Rovet was introduced, it was improved and renamed Fox. A top cross bar was added that kept the frame from bending under heavy loads, like jumping curbs or hitting pot holes. That made it necessary to swing your leg over the back of the bike to mount and dismount it. It was no longer a step through design. 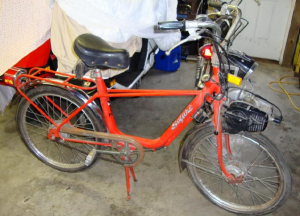 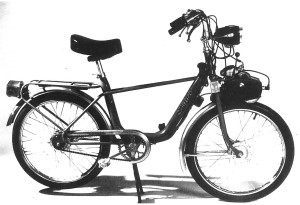 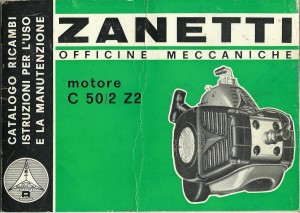 This entry was posted on Saturday, November 5th, 2022 at 4:33 am and is filed under Media. You can follow any responses to this entry through the RSS 2.0 feed. Both comments and pings are currently closed.