Tomos Wiring: Here is a complete, detailed, and accurate set of wiring diagrams. These took 200 hours, over a 3-month period, to gather, interpret, colorize, and edit for clarity. Many of the originals were terribly inadequate, although functionally correct.

Trac Wiring: Trac mopeds were made in Korea by Dailim (DMC). Early Tracs were a mix of European and Asian components and designs.

Later Tracs were all Asian, with wire colors same as Honda. 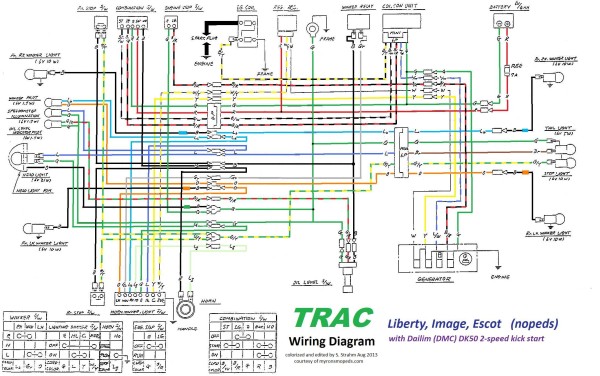 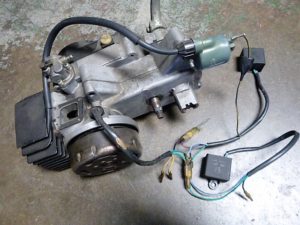 There are two CDI units that look the same. Here the key switch is bypassed by joining the two black/red male bullets. The engine stop button (black/white) is also disconnected. This apparatus has good spark, when the wheel is spun counterclockwise by hand. Note that the coil is grounded. 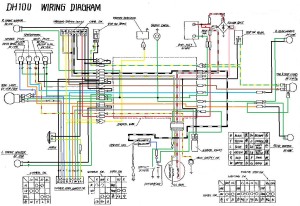 The DMC DH100 (4-speed 97cc 4-stroke overhead cam motorcycle) had a 3-wire magneto/generator down in the oil bath, with external points and condenser up on the overhead cam. Very much the same as a Honda 90, except the Trac had a ignition source coil in the generator, while most versions of Honda 90’s did not . A 1986 Trac DH100 would run with a dead or missing battery, but a 1971 Honda Trail 90 would not. These similar small motorcycles are examples of the difference between a battery ignition and a magneto ignition system.

This entry was posted on Wednesday, July 20th, 2022 at 4:30 am and is filed under Media. You can follow any responses to this entry through the RSS 2.0 feed. Both comments and pings are currently closed.