Sachs (Hercules) Wiring: Sachs mopeds, made by Nürnberger Hercules Werke GMBH, should not be confused with mopeds that have Sachs engines, like General, Grycner, Clinton, Colombia, AMS, Foxi, Sparta, Flying

Dutchman, Eagle, and many others. Most of the “true” Sachs mopeds can be identified by the Hercules “H” logo stamped into the headlight mounts. Sachs early models, roughly 1976-1978, had an internal ignition ground. Those never lost spark because of bad brake light wires. Sachs later models, roughly 1978-1981, had an external ground. Those had a secret ignition ground resistor hidden inside the CEV 2-bulb tail light. If that went bad, the ignition would not have spark when either brake was applied (or all the time, if the brake light switch wires were loose). In that case attach the ignition ground wire, that comes out of the engine, to ground. It’s blue/black for Bosch magnetos, and black for Motoplat magnetos. That will restore the spark, but disable the brake light, for emergency use or troubleshooting.

Sachs 1980 Suburban
wires inside head light.
Behold, the “mystery”
diode that powers the
horn from the ignition. 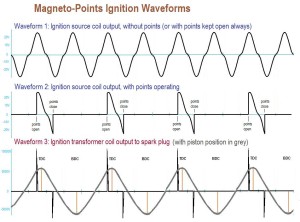 Ignition Waveforms: Interrupted AC
Curve 2 shows how the points interrupt the source,
and cause the unused negative triangular sections.
On a Hercules, they get less when the horn is used.
On all other bikes those minus voltages are unused.

“Mystery” Diode: All Hercules-made mopeds borrow electric power from the ignition wire (not the ignition ground) to power the horn. Normally this would kill the spark. But the wise Germans found some unused power. It’s a little hard to understand, without lots of pictures and hand waving. The flywheel has four bar magnets aligned N to N and S to S, so there are two Norths and two Souths per revolution. The current generated reverses direction every 90 degrees. The points open (the spark moment) near one of the magnetic maximums, say North. About 45 degrees later, the field is zero, and heading South. The points stay open for about 20 or 40 more degrees. That’s when there’s a short period of available reverse current/power. (When the points finally close, a secondary weaker spark occurs, with reverse polarity, but has no effect on the already burned gas.) The diode allows that reverse current to flow to the horn instead of to the spark coil, so no secondary reverse spark is produced at the spark plug when the horn is on. The diode one-way-gate stops the forward current from flowing out to the horn, so the main spark is not affected. The main spark only needs the forward current and not the reverse.

Always disconnect the power diode, aka “Mystery Diode”, and the engine stop switch, when troubleshooting for no spark, on a Hercules-made moped. It’s either inside the head light, or down near the engine. It is for making the horn not dim the headlight.

Sachs 504 Engine with Motoplat (made in Spain) 80mm magneto/flywheels are used on some Hercules, Sparta, and KTM mopeds. They are gold colored, and have the number 9600089. The wires are yellow = lights, blue = ignition, black = ignition ground. Their points have a built-in red wire. Condenser is CEV-compatible. 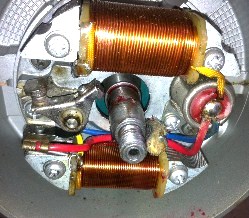 Motoplat 80mm flywheels used on 1976-86 Derbi mopeds have the number 9600099. Those wires are red = lights, green = ignition, blue = ignition ground. Their points are different, and also have no built-in wire. Condenser is CEV-compatible.

Sears Free Spirit Wiring: The Free Spirit moped, made by Kromag, has the same wiring and electrical equipment as 1977-78 Puch Maxi (6-wire). In fact, the whole bike is Puch, but it doesn’t say “Puch” anywhere on it. All of the brand markings have been removed, to make it seem like Sears made it. Like all the Bosch 6-wire magneto Puch wirings, the blue/black wire that powers the horn is an external ignition ground for the source coil. Unplug the horn wires and loosen the light/horn switch clamp from the handlebar, and a Free Spirit will loose spark and not run. Also, like 78-later Puch, the horn button does the opposite of all other horn buttons in the world. It is normally closed, and when you push, it is momentarily open. If you replace it with any other horn button, the horn would be on all the time, and go off when you push the button. To eliminate the chance of loosing spark due to bad horn wires, simply gound the blue/black magneto wire at the terminal strip above the engine, by moving it over to the brown wire that goes to ground. 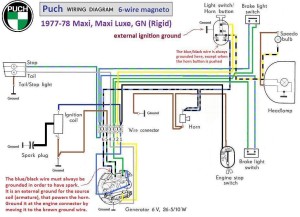 Solex Wiring: The 1970’s and earlier Solex 3800 had only one wire outside of the engine, going to the tail light. Instead of wires, the head light and switch had direct contacts. The ignition spark coil was internal, with the spark plug wire coming out of the magneto.

Soni Wiring: This 1980’s India remake of a 1970’s Italian made Vespa/Piaggio moped, has functionally the same wiring, pretty much, as Vespa did. Unlike the Kinetic, a 1990’s India made Vespa remake, that has a CDI ignition, the Soni has points, and an external ignition ground magneto that powers the brake light, like Vespa/Piaggio. When we say “ground the pink wire to get spark if the brake light filament burns out”, in India they say “earth when stop light is fused”. It looks like it has an emergency wire that would allow it to run if it lost spark from a blown brake light bulb or loose wire.

Sparta Wiring: Sparta had two 80mm magneto versions for the Sachs 504 engine, Bosch 4-wire and Motoplat 3-wire. The wires on the bike are the same, except Motoplat version has an external ignition ground, a tail light secret resistor, brake switch type NC not NO, and the brake switches wired in series, not parallel. The Motoplat version needs the brake light wires and correct bulb to have spark.

One way to tell which (brake light) wiring and magneto version a Sparta has, from a distance, is by the color of the ignition coil and plug wire. Motoplat is red, while Bosch is black. It’s the same situation as Hercules/Sachs wiring. Spartas with red coils have normally closed (white or brass tip) brake light switches in series, and a secret brake light resistor-diode circuit board inside the tail light. Spartas with black coils have normally open (black tip) brake light switches in parallel, and no brake light resistor inside the tail light.

This entry was posted on Wednesday, July 20th, 2022 at 4:28 am and is filed under Media. You can follow any responses to this entry through the RSS 2.0 feed. Both comments and pings are currently closed.