Jawa Wiring: The original Jawa Babetta, with the famous red “Tranzimo” ignition unit (coil with electronic circuit) had 19″ rims was sold in Europe since 1972. Sometime after that the rims became 16″, and the model became also known as the “207”. Starting in 1976, American Jawa sold US versions of the model 207. They had brake lights and engine stop switches. The earliest US Jawa Babetta was the 1976-78 model 207-011, with big red Tranzimo ignition unit visible on the right side above the engine, with it’s high tech thyristor exposed on one end. 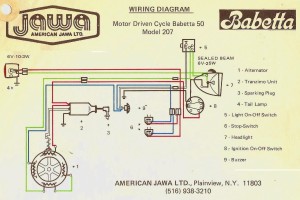 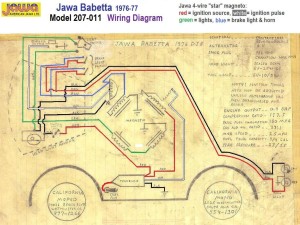 In 1978, starting with frame number 211000, the official US model name changed from Babetta to 50 DL, the model number changed from 207.011 to 207.111, and more importantly, the “big red Tranzimo” thyristor ignition unit and stator changed to the newer “black box with separate metal-can-coil” thyristor ignition unit and stator. 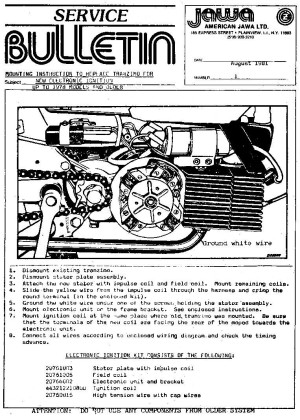 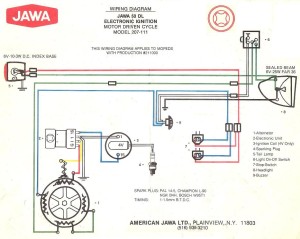 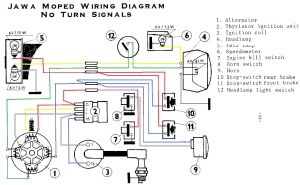 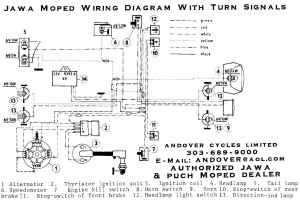 In August 1981, American Jawa sent out it’s first service bulletin, telling dealers how to cure the Tranzimo ignition problems once and for all, by replacing with the newer black box thyristor type.

In 1983, an all-new model was indroduced, the Jawa 210. It had a two-speed instead of one speed transmission. It had a new frame and other improvements. In the mid 1980’s the 210 was made in sport and deluxe versions. The wiring did not change on the 210 models for the rest of the 1980’s.

Jawa Thyristor: Here is an excellent article on how to replace a burned out Jawa “black box”. There are just three components to buy and solder together, a thyristor, a capacitor, and a diode. Here is an even better article that shows in detail the ignition versions, upgrades, and individual thyristor component replacement options.

In 1993, the country of Czechoslovakia split into Czech Republic and Slovakia. That was pretty much the end of the old Jawa. Then in the mid 1990’s, Jawa mopeds were re-made in Hungary at the Korado factory. The step thru models were called Babetta, while USA top tank models were called Jawa (1995 Sport, Supersport, Ultrasport). The re-make Jawa/Babetta wiring changed, to be like the 1995 Puch Korado, made in Hungary by Manet, with one wire for all lights and a 12VAC shunt type voltage regulator. See Manet Wiring for that. The last year for the beloved Babetta was 1997. Click here for the full Jawa history.

JC Penney Wiring: JC Penney department stores sold the Pinto and Swinger moped models, made by Kromag. They have Puch engines and 1977-78 Puch (6-wire) wiring, where the blue black horn wire must be grounded to run. See Kromag Wiring.

This entry was posted on Wednesday, July 20th, 2022 at 4:11 am and is filed under Media. You can follow any responses to this entry through the RSS 2.0 feed. Both comments and pings are currently closed.