Garelli Wiring Diagrams: All have CEV 3-wire magnetos with external ignition ground powering the brake light. Garelli wiring is functionally the same as “Minarelli” Wiring on many Italian mopeds. Only some of the wire colors and connector or switch styles are different. 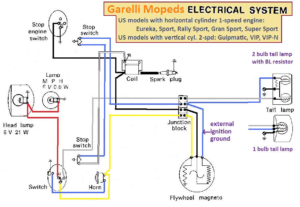 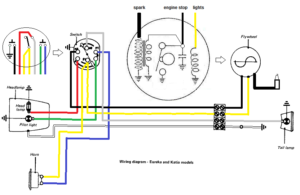 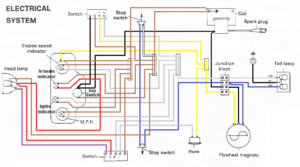 General Wiring Diagrams: There has been confusion for years, because of 1) mistakes in the original wirings,  2) wiring in some models not agreeing with the original owners manual, 3) different brand names and alias names for the Jui Li, Her Chee, or Tsing Hua made mopeds, 4) lack of coverage of wiring issues in the service manuals (perhaps because different engines were optional, the engine manuals were separate and not integrated into the main manual), and 5) different versions were produced, sometimes without documentation. The wirings below come from actual wiring harness replacement parts, or actual mopeds or scraps of them. Showing the real wires alongside the diagram for them proves that these corrected wirings are accurate, even though some things might contradict some original wiring diagrams.

General and Lazer (Jui Li) top tank mopeds (Minarelli V1 engine with CEV 6932 magneto with external ignition ground): General 5-Star and Lazer Sport 50 have 97% the same wiring, except for: 1) General has a steering lock key switch, that kills the spark and un-grounds the battery when the key is removed, 2) Lazer has an additional lite green and red ground wire in the harness, 3) Lazer has a 6N2-2A battery, while General has a 6N4B-2A battery, twice the amp-hours and wider.

General 5 Star ST step thru mopeds (Sachs 505 engine), made by Jui Li: General 5-Star ST wiring “early” version is functionally the same as the top tank models, because of the 3-wire Bosch magneto, configured to charge the battery from the ignition ground. With this version, if you removed the battery, or it went bad from sitting, the ignition would loose spark. The General 5-Star ST wiring “late” version instead charges the battery from the main lights wire and has the ignition ground always grounded, so it never looses spark even when the battery is removed. The trade-off for that increase in reliability is a slightly dimmer headlight, which is also a good thing because it helps prevent headlight burn out.

Grycner mopeds are identical to General step thru, but have Bosch 5-wire magnetos, with internal ignition ground, and slightly different wiring.

Unbranded generic Jui Li step thru and top tank mopeds are identical to General. Their wiring and magneto is unknown.

AMS Sierra 50 step thru and Tahoe 50 top tank, are made by Her Chee, not Jui Li. They have wiring compatible with General ST, and a Bosch-compatible 3-wire 90mm Taigene magneto. AMS has the later Sachs 505/1D rather than 505/1A.

General Battery Versions: All Generals and Grycners use a 6N4B-2A flat 6 volt battery. Notice in the “General 5 Star Versions” photo above how the original top tank wiring came with different battery wire connectors, either male or female bullet. Besides that the modern replacement batteries have different wires than the original batteries did. See above section “B” about Battery Wires.

Gilera 106 SS (1967) Sears Allstate (US model) has a CEV 6826 3-wire points magneto with external ignition ground on the green wire. If that wire is disconnected there will be no spark.

This entry was posted on Wednesday, July 20th, 2022 at 4:07 am and is filed under Media. You can follow any responses to this entry through the RSS 2.0 feed. Both comments and pings are currently closed.