Welcome. Jawa Motors (pronounced ‘YAH-vah’) is a Slovakian producer of motorcycles that also produced mopeds. Founded in 1929 by František Janeček, the company name is a combination of the first letters of the founder’s name and the first two letters of their motorcycle product, the Wanderer. 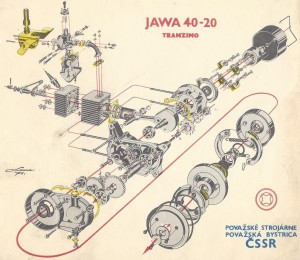 ZVL is the parent company, with 64,000 employees in 1983, that produced bearings, weapons, and military aircraft engines, and other machinery products.

Babetta was a line of mopeds made in Slovakia (formerly C.S.S.R or Czechoslovakia). Babetta is a girls name from a popular 1960’s Czech song. The domestic models were called Babetta, while most export versions were called Jawa. Before 1986 the production was at Povážské Strojárne (PS) (Povaska machinery company) near the city of Povážské Bystrica in north-central Slovakia. After 1985 production moved to the town of Kolárovó (Gúta in Hungarian), in southern Slovakia near the Hungarian border. As a result of that move, quality issues plagued many of those mid-to-late 1980’s Jawa mopeds. Later in the 1990’s back at Povážské Strojárne, production restarted with the Puch Korado, made by Manet, with a Puch remake engine. The full Jawa Babetta history is told by Edgar Uher, the German importer of Babetta mopeds in the 1990’s, with the help of long time Babetta engineer Jan Sujansky, who lives in Povážské Bystrica and also worked at Kolárovó for many years: http://www.jawamoped.com/html/history.html

Motokov was the Czechoslovakian importer/exporter of automotive products. They were the sole exporter of Jawa mopeds.

These are European models, with smaller lights, no horn, no brake light.

This entry was posted on Friday, December 25th, 2020 at 6:34 pm and is filed under Jawa Menu. You can follow any responses to this entry through the RSS 2.0 feed. Responses are currently closed, but you can trackback from your own site.