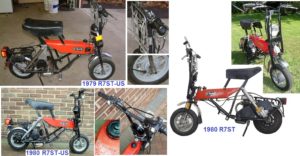 R7ST had a new engine called M1, designed and made by DiBlasi. It was made to be compact and light weight. Bore and stroke were 39 x 41.8 mm, comp ratio 8.7, horsepower 1.25. It had an expanding pulley with a V-belt (a variator) like a French moped, kick start, and a 415 chain final drive with 9 x 42T sprockets. The cylinder and piston are the same as a ’70’s Motobecane AV7. It had a Dellorto SHA 14/12 carburetor with size 54 jet. The wheels and tires were new, 2.50-8, but had the same 13 inch outer diameter as the previous 4.00-5 tires. The Huret speedometer was way up on the right handlebar, so the speedo cable was long and straight. That solved the problem of broken speedo cables on the R2, which had a short S shaped cable.

R7ST was the Euro version. Engine stop, horn and light switch were all on the left handlebar. The magneto-generator produced 6 volt AC 18 watts, for a 3 watt tail light and a 15 watt headlight or parking light. The ignition part of the magneto-generator was completly separate from the lights. The Huret speedometer said kilometers.

R7ST-US was the United States (US), Great Britian (GB) and Switzerland (CH) version. Engine stop switch was on the right. Horn/light switch was on the left. The switches had English words on them saying what they do. The magneto-generator produced 6 volt AC 25 watts, for a 5 watt tail light and a 20 watt headlight. The ignition part of the magneto independently produced 10 watts of power for a brake light, by using an external ignition source ground wire (blue). The blue must always go to ground (frame or engine case) in order to have spark. The Huret speedometer said miles.

R7WT was mostly the same as R7ST except the wheels and tires changed back to 4.00-5.

R7WT for most of Europe and the world. It had a 6 volt 18 watt magneto. The lights were smaller and less watts. No brake light. One left-side handlebar lights/horn/engine-stop switch. It had a CEV 6931 (CEV #04394) magneto with internal ignition ground, external spark coil. Source coils are 04233 lights and 04277 ignition in the parts list, but at least some have an 04235 ignition spark coil and no external spark coil. All the other parts (points, condenser, flywheel, etc) are the same as the USA version.

R7WT-US was for United States (US), Great Britain (GB) and Switzerland (CH). It had a 6 volt 25 watt magneto. The lights were bigger. There was extra equipment for a brake light. Two handlebar switches, right-side engine stop, and left-side lights/horn. These were the CEV “diamond” type. The points-type magneto was CEV 6932 (CEV04212), with external ignition ground, external spark coil. The blue wire must be grounded to have spark. This was to meet the legal requirement that the headlight must not get dim when the brake light goes on. 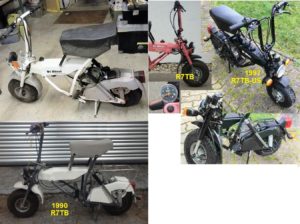 ’89-95 R7TB had a low headlight. The handlebar at first was the T-type, and then changed to the clamp-on type. The M1 engine had the following improvements. The ignition became electronic and maintenance-free. The lights generator made more more watts. A solid-state electronic voltage regulator #2004 made the lights not get too bright when going fast, yet not get too dim when stopped at a light idling. There was one lighting equipment version, 6 volt 40 watt. 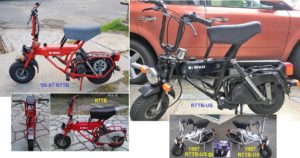 R7TB was for most of Europe and the world. It had a 12V 40W IDM magneto #725. The lights were the same. No turn signals. No brake light. One left-side handlebar lights/engine-stop switch #792.

R7TB-US was for United States (US), Great Britain (GB) and Switzerland (CH). It had a 12V 60W IDM F085 magneto DiBlasi# 2002. Turn signals. There was extra equipment for a brake light. Two handlebar switches, right-side engine stop/turn #794, and left-side lights/horn #792. These were CEV integrated black plastic switches that fit into the all-black Domino controls. The headlight became square in 1997.

R7E was for most of Europe and the world. 12V 60W IDM F085 magneto DiBlasi# 2002 and lights were the same. Turn signals. No brake light. Two CEV integrated handlebar switches, right-side engine stop/turn #794, and left-side lights/horn #792.

R70 is electric. Instead of a gas tank it has a long detachable battery. The wheels are the same as R7E-V2 with 4.00-5 tires and 70 mm drum brakes. The fenders, handlebars, seat and other things are also the same as R7E-V2.

R2, R7ST, R7WT wheels: ’70’s-80’s wheels had loose bearings and threaded 11 mm axles. The axles did not slide out. Threaded cones were the inner bearing race, press-in cups were the outer bearing race, and ten 1/4″ balls were in between the races.

R7TB, R7E wheels: ‘90’s-on wheels had press-in sealed bearings and smooth 10 mm axles. The axles slide out once one of the inner nuts is removed. The bearings are one-piece deep groove type aka “sealed”. There is no central tube between the bearings to support the tightening load of the axle nuts. Instead there are thin nuts required on both sides of the axle. If either inner nut is missing, the wheel freezes up and the bearings get crushed when the axle nuts are tightened. 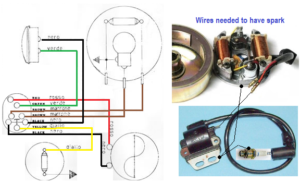 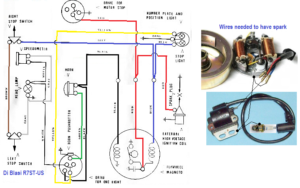 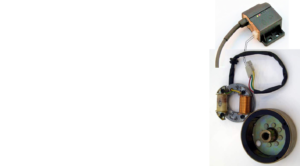 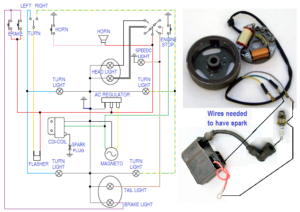 Since the mid-1970’s US motorcycles and mopeds were required to have the engine stop button reachable with the right thumb, without removing the hand from the handlebar. Since that time European motorcycles and mopeds were required to have it on the left side. You can tell a US model from an EU model by the location of the engine stop button. Left is EU, right is US. 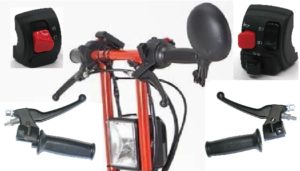 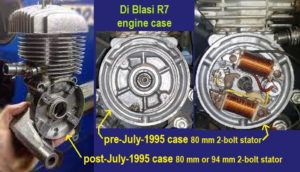 Many other Di Blasi parts were changed or improved without changing the part number, as long as they could correctly replace the previous part version.

Crankshaft right end: The right crankshaft tapered end holds the flywheel precisely. The taper angle has one standard. The diameter has two standards. A woodruff key locates the flywheel at the correct ignition timing angle. The key width is 3.0 mm. The Di Blasi R7 timing angle is the same as a late 70’s or 80’s Minarelli V1, because they both used, at different times, the same CEV 6931 or 6932 magneto-flywheel.