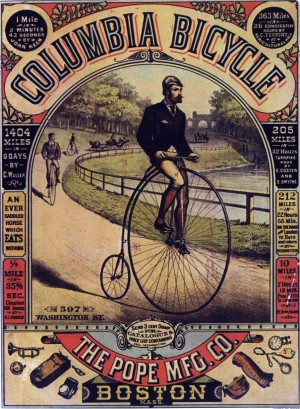 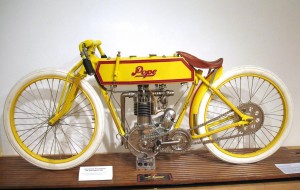 Columbia is one of America’s best and oldest bicycle makers. From the days of true horse power, their bicycle was “an ever saddled horse which eats nothing”. Colombia and Montgomery Ward mopeds are made by Colombia Manufacturing Company, Division of MTD Products Inc, One Cycle Street, Westfield MA 01086.

Columbia has been credited with many firsts in the biking industry, since its founding in 1877 by Col. Albert Pope. It has pioneered many improvements to the industry, producing bikes, motorbikes, and furniture for nearly 150 years. Here is the Columbia Manufacturing Inc website, history page. http://www.columbiamfginc.com/columbia_history.html

Yard-Man is the brand name of MTD Products (which owned Columbia). They made (and still do make) lawn mowers, power equipment, small motorscooters (1960’s) and mopeds (1970’s).

Western Flyer is the brand name of Western Auto Stores products, like bicycles, motorbikes, toy wagons, scooters, etc. In the 1950’s, Western Flyer bicycles  equipped with Whizzer motors were also sold there. That was the original all-American moped. See Whizzer.

KKM Enterprises  405A Old Gallia Pike, Franklin Furnace, OH 45629 in 1987 bought the rights, procedures and equipment needed to make Columbia mopeds, both the stamped sheet metal kind, and the tube frame kind. From 1987 to the mid 1990’s they re-made Columbia’s that were all called Mopet.

Solo 255 engine: Instead of the Germany made original pulley-clutch, Columbia made their own centrifugal clutch and pulley system. The pulley halves have three different spacings for 20, 25 or 30 mph speed versions. The engine swings and has springs that pull it forward to keep the belt tensioned. That allows the same belt, rear pulley and sprockets for all three speed versions.

This entry was posted on Saturday, September 3rd, 2022 at 3:59 am and is filed under Media. You can follow any responses to this entry through the RSS 2.0 feed. Both comments and pings are currently closed.