By 1890 the recently invented roller chain had eliminated the big wheel, so the rider could be near the ground, for more safety and convenience. But air tires did not yet exist, so it was a bumpy ride.

It was during the second half of the 1700’s that Jean-Pierre Peugeot (born in 1734) took the initiative that was to lead his family towards industry. Initially flour millers, dyers and tanners, the family began its metalwork industry in 1810. Jean-Pierre Peugeot II (1768-1852) and Jean-Frédéric Peugeot, the two older sons and son-in-law J. Maillard-Salins, established a company for the melting and working of steel, in Montbéliard, while their two younger brothers, Charles-Christophe Peugeot and Jean-Jacques Peugeot chose the textile industry. The company’s trademark, a lion, was created in 1858 by an engraver, Justin Blazer, who lived near the factory. The company turned their steel into knives and forks, razors, sewing machine parts, clock springs, stays, hoops for women’s crinoline skirts, hydraulic equipment, and later in the 1880’s, bicycle spokes and rims.

Enjoy the story of Peugeot, exactly as told by Cycles Peugeot in 1977.

Europe’s largest 2-wheel producer was founded in 1810 by a pair of miners who saw a better future working metal above ground. You already know their name; that first little foundry of the Peugeot brothers had a date with history, In 1882 the family turned its metal working skills to a new product, the bicycle. That led to automobiles, which led to an international business empire. 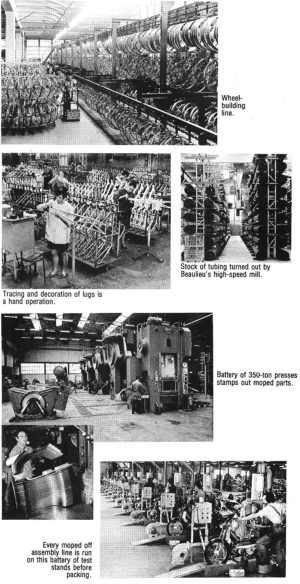 At the top of that empire, a financial holding company, Peugeot S.A., controls three main companies: Cycles Peugeot, Automobiles Peugeot, and Automobiles Citroen. They comprise 180 subsidiaries with 175,000 employees … 25,000 of them with the 80 subsidiaries located ouside of France. But automobiles have never seduced Peugeot away from 2-wheelers.

Though other car makers have bikes in their past … and many bike makers (America’s Columbia, for example) once flirted with autos … today only Peugeot’s name stands for both. And although there is diversity in Peugeot products – to bikes, mopeds and cars must be added tubing, containers, hydraulic loading platforms, store fixtures, kitchen furniture, houshold items, etc. – Cycles Peugeot’s 2-wheel concentration is emphatic and productive: In 1976 it accounted for 37% of France’s 1.9 million bike production and 57% of its bike export, 45% of France’s moped production and 50% of its moped export.

The small within the big  Size and diversity often rule out the slow, painstaking hand craftsmanship that produces bicycles for professional racers and amateur connoisseurs. Not so at Peugeot. True, the production lines of its vast Beaulieu works can turn out a bicycle every 15 seconds, a moped every 20. Block-long tube mills form tubing at 50 meters a minute. Mighty presses stamp out parts that conveyor belts move to their destinies at thousands an hour. But within the same walls is another, very different kind of production:

The “Atelier Prestige” Prestige Studio, is a quiet, immaculate workshop, where a small team of craftsmen make Peugeot’s top-of-the-line PY10 and PY60 models … one at a time, entirely by hand. From this room come the bikes of the famous Peugeot racing team, and its star, Bernard Thevenet, who has just won the Tour de France for the second time in three years. And from this room and these same, unhurried hands come the PY10’s and PY60’s you order.

The order form for one of these is a two-page document, with space to specify not only such obvious choices as frame size and color but also chain wheels, crank length, hub style, sprockets, toe clip length, anodize choice (silver or gold) for light alloy components, saddle choice, etc. Any demand can be honored, but the order form gives sound recommendations and a complete gear table as a guide for those who need it. 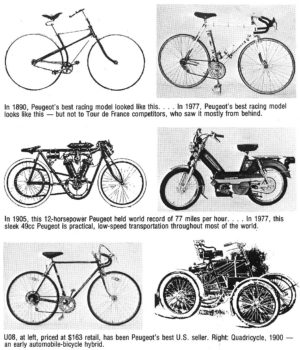 French first: The late 1890’s were an era marked by heavy investment in and widespread purchase of French cycle firms by foreign interests. Peugeot, in 1897, gave its response to this trend in an advertisement: “THE HOUSE OF PEUGEOT HOLDS TO THE HONOR OF REMAINING FRENCH; it has REJECTED the considerable offers which have been made and announces that WHATEVER PRICE IS OFFERED, IT WILL REMAIN FRENCH!” When it comes to choosing components, Peugeot still holds to that honor. In an era when the makeup of bikes is increasingly international, it features French. It is not denied that many nations make fine components, or that superb bicycles may be built using a blend of them. Nor are they totally unyielding; Reynolds tubing forms their top-of-the-line frames, and Weinmann brakes are found on the UO-8, it’s biggest U.S. seller. But Peugeot holds that a bicycle is the sum of its parts, and that in a French bicycle, as many as possible should be French. Given the scope and technology of French components available, they prefer not to look elsewhere. 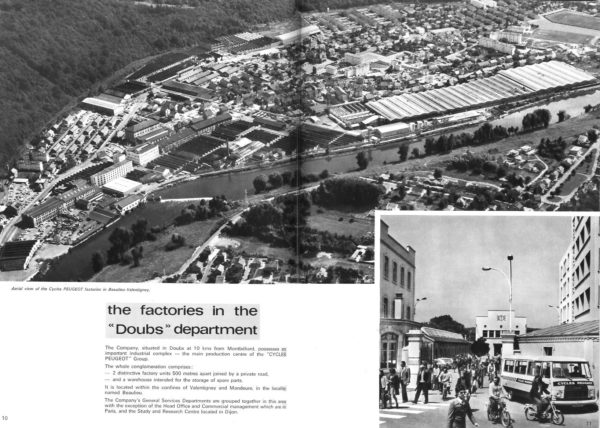 Although four factories contribute to Peugeot’s 2-wheel production, the 200,000-square-meter complex at Beaulieu is the main resource. This beautiful terrain of hills and rivers, called the Doubs Region, is definately Peugeot Country. It is where the brothers Peugeot started in 1810. Today’s factory stands on the site of the mill the family bought in 1857 to make spring steel … for ladies’ hoop skirts … a style the bicycle was to help eliminate. Here were made their first bikes, and here are made their latest. It is not surprising to find entire “Peugeot families: – grandfather, father, son and daughter-in-law – all Peugeot workers. The company’s participation in the life of the region extends to housing, restaurants, libraries, holiday camps and medical care for its thousands of workers.

In the U.S.  Cycles Peugeot directs the activities of such national subsidiaries as Cycles Peugeot Germany, Cycles Peugeot Spain … and of course, Cycles Peugeot (USA) Inc. – founded in January 1976. The parent company and the U.S. division share the same president, Bertrand Peugeot. General manager Edouard de Truchis conducts operations from the headquarters and warehouse in Gardena, Cal., and Eastern Division manager Ron Krieger is in the offices and warehouse in New Jersey. The office and public warehousing in Jacksonville, Fla., is supervised by Joe Morris, and is part of the Eastern Division. Cycles Peugeot (USA) is the sole U.S. distributor of the brand, and sells to specialist cycle and moped dealers only. It also distributes a number of European and American parts lines. About 400 people make up the staff, of whom 14 are salesmen calling regularly on dealers.

Peugeot has indeed made its mark in the U.S. bike market. In an era of countless brands and labels, they have made theirs on of those to be reckoned with. Any trade discussion of the factors in the market must include Peugeot, any gathering of cyclists is dotted with the familiar white frames with checkerboard trim. Their Tour de France victory is a reminder that these people are serious about bicycles. Their establishment of Cycles Peugeot (USA) says that they are serious about the American market.

1980’s update: In the 1980’s many things changed. Peugeot bicycles more and more became equipped with Japan or Taiwan made components, instead of all French. Peugeot 102 mopeds were sold in Montgomery Wards department stores, instead of only at Peugeot moped dealers. Department stores could not sell 103’s, and moped dealers could not sell 102’s. In 1981 when Royal Cyclery sold Peugeot 103’s for $599, Shaun remembers a big banner on the Montgomery Wards store in the newly built Hawthorne Mall. It said “MOPEDS $279”. That was unbelievably low. Even the low cost Taiwan made Speed Bird was $399 at Royal Cyclery. Department stores always did have lower priced bicycles than mom-and-pops bike shops, both because the product was made cheaper, and was purchased in huge quantities. 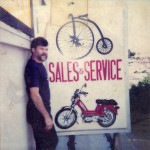 Like other moped makers, many 1980 models were made and stockpiled, to be sold in 1981 to maybe 1983. This was to avoid 1981 and later manufacturer requirements, such as the 17-digit VIN and noise level compliance labeling. But by 1984 Peugeot USA moped sales were way down because of low gas prices and competition from Honda, Yamaha and Suzuki. Around 1984-85 Cycles Peugeot stopped selling mopeds in the USA, but continued with bicycles.

Shaun and his father Gary Strahm at Royal Cyclery sold and serviced Peugeot bicycles and mopeds. Mountain bikes came out in the early 1980’s. Peugeot held onto the old ways longer than other makers. In 1984 the Peugeot Canyon Express was the last brazed lugged frame mountain bike, where all others were lug-less TIG-welded. Peugeot bicycle sales at Royal Cyclery kept on into the early 1990’s.

This entry was posted on Saturday, December 26th, 2020 at 9:35 pm and is filed under Peugeot Menu. You can follow any responses to this entry through the RSS 2.0 feed. Responses are currently closed, but you can trackback from your own site.