Here is shown and explained the complex family of Cosmo branded mopeds, US models, with different makes, models and year ranges:

These were top-tank tube-frame mopeds with Morini M-1 or M-101 engines. The 1980 Cosmo Colt 3 is the same as a 1978 Malaguti Pilot. They are both made by Malaguti in San Lazzaro di Savena, Italy. See below.

This was a top-tank moped with Sachs 505 oil injected engine. The Cosmo Colt 5 chassis is the same as a Baretta Magnum. They are both made by Piccoli Motori in Bologna, Italy. See below.

This was a scooter-like pedal moped, with a Minarelli V1 engine. It had small tires and a fully enclosed body like a scooter. It is the same as 1970’s Testi Amigo (Euro model) except for lights. See below. 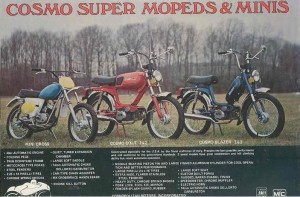 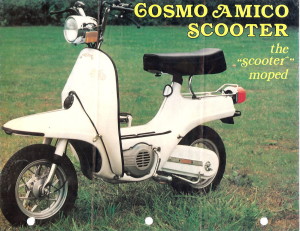 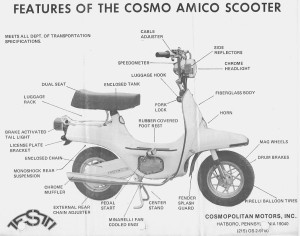 In Europe the Testi Amico was made and sold from about 1970 to 1980. But US-model versions were made in about 1979-1980, and sold in the early 1980’s. They were imported and distributed by Cosmopolitan Motors in Pennsylvania.

This entry was posted on Friday, July 13th, 2012 at 12:21 am and is filed under Cosmo Parts. You can follow any responses to this entry through the RSS 2.0 feed. Both comments and pings are currently closed.