Welcome. Kromag Metallindustrie AG was an Austrian metal products company. The name comes from the metals chromium and magnesium. The logo is a metallurgist wearing a fire suit stirring a vat of molten metal with a long cane.

Kromag made the Sears Free Spirit and the J.C. Penney Pinto and Swinger. These department store mopeds were intentionally without manufacturers names or logos to hide the identity.

Kromag is not KTM. Kraftfahrzeuge Trunkenpolz Mattighofen is KTM. The craft shop in Mattinghofen, Austria was founded in 1934 by engineer Hans Trunkenpolz. Motorcycle production began in 1954.

KTM made the Foxi Deluxe, Foxi Salzburg, and Foxi Baron. All of the Austrian frames, Puch, Kromag, and KTM are made for Puch engines, but the KTM has a Puch-to-Sachs adaptor bracket for the Sachs 504 engine.

Kromag is like Puch. They are both made out of the same ingredients, but combined in different ways. At right are the Puch models that share the same components as Sears Free Spirit or JC Penney Pinto.

In 1978-80 Sears sold three moped models, all made by Kromag in 1978. Two of the models came in three speed versions, to make a total of 7 Free Spirit versions. The bikes did not have any model names or decals, other than “Free Spirit” on the back of the seat. Over the years this has caused some to be called by the wrong name.

Free Spirit Components: All Free Spirits have the Puch E50 one-speed engine with all-aluminum-cylinder, like a “plain” Maxi. All have Bing “round” 14mm carbs (1/14/163 and 1/14/164), and Bosch 6-wire “external ignition ground” magneto (0212-024-043), and Puch electrical wiring (where the horn wires can cause the engine to not run). All have ULO 250 2-bulb tail lights, and 0.9 gallon detachable gas tanks with 40mm quarter turn gas cap, like a Magnum. All have Magura “wrap-around” controls like a “plain” Maxi. All have Magnum-type steering (headset) cups and bearings, and Magnum-type engine covers (chain guards), unlike a Maxi. 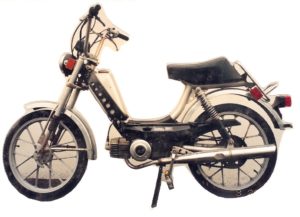 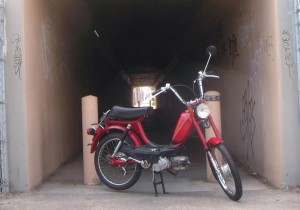 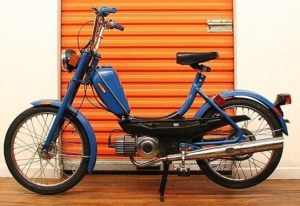 Here is a link to Sears Parts Direct. It shows all the moped parts with beautiful illustrations and easy to follow menus. Only a few Sears moped parts are available, and can be ordered online there. But most of the 1970’s Sears Free Spirit (made by Kromag with a Puch engine) parts are listed as “no longer available” 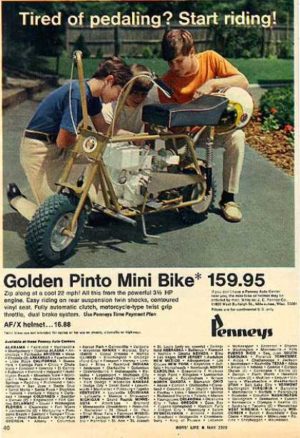 Pinto: A pinto is not just a horse with large white areas. One of the models Penneys sold was this Golden Pinto Mini Bike, for $159. So the name Pinto was used on mini-cycles years before it was on mopeds. Of course, the 70’s also had millions of Ford Pinto automobiles.

A Pinto is also a 1978-79 moped, made in Austria by Kromag. Somehow both Sears and JC Penneys, competitors, were made by the same maker. Both concealed the identity, of the bike and many of the components, and re-branded them with their own name.

Swinger was the Penneys 1960’s to 70’s line of childrens bicycles, 20″ tires with banana seats.

Kromag is closely related to Puch, because much of their equipment is identical. Different parts of the 1978-79 JC Penney models are also on different Puch models, but not all at once.

Swinger components: The fork, fenders, Leleu spoke wheels, Puch E50 motor, Bing carburetor, Bosch magneto, Merit switches, Magura controls, ULO tail light, CEV head light (most) and seat are the same as (or from) a 1977-78 Puch Maxi. The side covers and ULO headlight (some) are from a 1978-79 Puch Magnum.

Look for these and other component parts in the separate components sections, like spokes, brakes, tires, bulbs, etc. 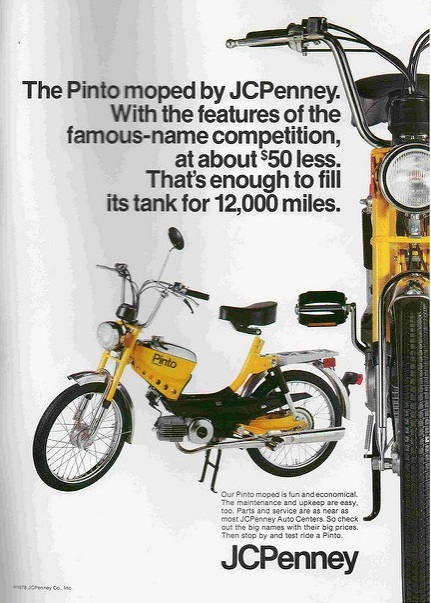 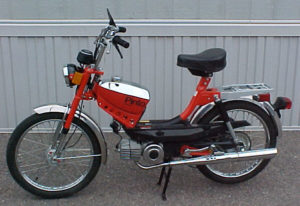 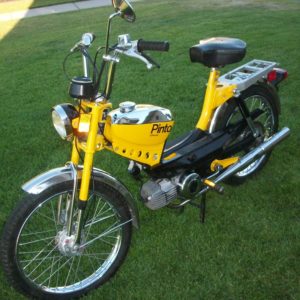 Pintos were deluxe models with chrome fenders, and an all-chrome gas tank, but with the lower half painted. 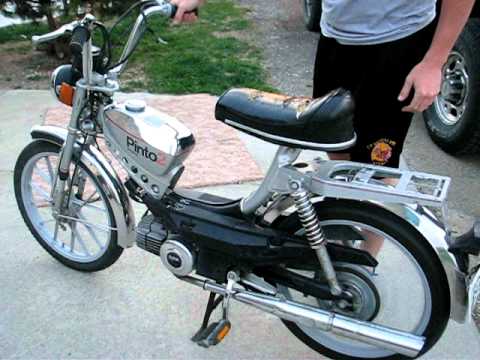 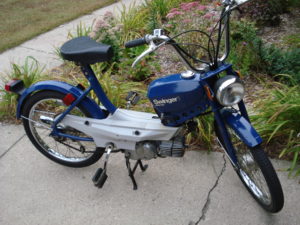 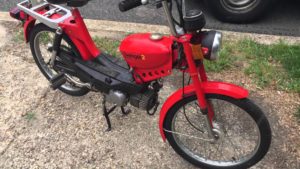 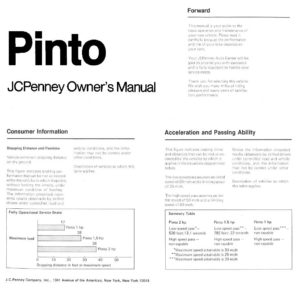 There are not any parts or service manuals for JC Penney in Myrons Mopeds library. Service and parts were obtained through JC Penney Auto Service Centers only, not from independent moped shops.

Here are 5 pages from the 36 page owners manual. The lower part is the Acceleration and Passing Ability (Inability actually) information for consumers. This is the only evidence and information about the three speed versions, 1.0 hp (20mph), 1.5 hp (25mph) and 2.0 hp (30mph).

It is easy to assume that JC Penney mopeds have the same power restriction equipment as Sears Free Spirit mopeds, since they are 90% the same.

This will be updated or verified when proof becomes available.