Di Blasi Industriale is an Italian manufacturer of folding bicycles, tricycles, and mopeds, based in Francofonte, Sicily.

From Wikipedia  The founder of the company, Rosario Di Blasi, began development of a folding scooter in 1952, which by 1968 had evolved into a Zanetti-powered folding tricycle called the DIBLA 7 that was shown at the Turin Auto Show as a prototype. Finally in 1974 Di Blasi began production of a folding moped with a Franco Morini motor and single-speed transmission called the R2 (also known as the “Paperino”). In 1979 the model R7 replaced the R2 and featured an engine of Di Blasi’s own design as well as a multi-speed transmission. This moped has been continuously improved and is still in production as the R7E. It has been used by the Polizia Stradale, the Traffic Police division of the Italian National Police, aboard their helicopters. The R7 is sold by Di Blasi of America as the “Express.”

Di Blasi of America is in Florida USA. Here is the website: https://www.diblasi.com/

Di Blasi mini-cycles (mopeds): These are collapsible mini-cycles that can fit in a bus, airplane, train, boat or car. Although they lack pedals, they are legally mopeds in many, but not all, US states. They fold into an incredibly compact size. When you load or unload it you get to say “hand me that motorcycle” with a devious smile! 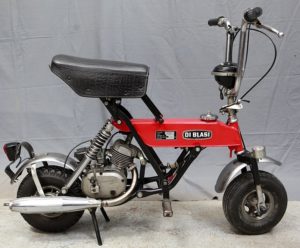 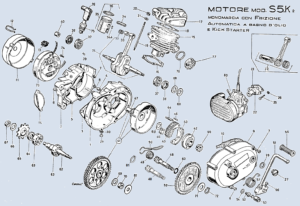 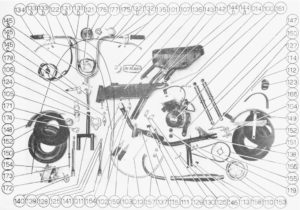 R7: The Di Blasi R7ST had a new engine, the M1, designed and made by DiBlasi. It was made to be compact and light weight. Bore and stroke were 39 x 41.8 mm, comp ratio 8.7, horsepower 1.25. It had an expanding pulley with a V-belt (a variator) like a French moped, kick start, and a 415 chain final drive with 9 x 42T sprockets. The cylinder, piston, head, and most of the crankshaft look the same as 1970’s Motobecane AV7. It had a Dellorto SHA 14/12 carburetor with size 54 jet. Carburetor parts are offered in Parts/Carburetor/Dellorto. manualmachine.com has the 1985 R7WT parts manual and the 1985 R7WT owners manual .

Di Blasi magneto part numbers are CEV-Pagani numbers with the prefix PG (for Pagani-CEV). Parts are in Parts/Ignition, Magneto/CEV magneto.

The Di Blasi R7TB had the following improvements. The ignition became electronic and maintenance-free. The lights generator made more volts and more watts. Together with a solid-state electronic voltage regulator (#2004 in the parts picture) this made the lights not get too bright when going fast, yet not get too dim when stopped at a light idling. There are two lighting equipment versions shown in the parts pictures, a 12 volt 60 watt and a 12 volt 40 watt.

The piston pin is referred to as TCK13, which must mean it is 13mm like a Motobecane AV7. The piston rings are 39mm like Motobecane. Spark plug NGK BR6HS (resistor type).

Lighting Equipment Versions
1. The “EU” version was for most of Europe and the world. It had a 12V 40W magneto #725. The lights were the same. No turn signals. No brake light. One left-side handlebar lights/engine-stop switch #792.
2. The “US” version was also for Great Britain (GB) and Switzerland (CH). It had a 12V 60W magneto #2002. Turn signals. There was extra equipment for a brake light. Two handlebar switches, right-side engine stop/turn #794, and left-side lights/horn #792. These were CEV integrated black plastic switches that fit into the all-black Domino controls. 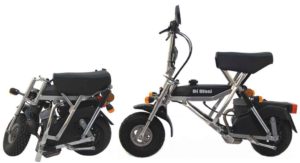 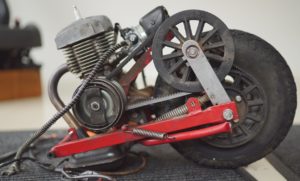 Lighting Equipment Versions
1. The “EU” version was for most of Europe and the world. 12V 60W magneto #2002 and lights were the same. Turn signals. No brake light. Two Two CEV integrated handlebar switches, right-side engine stop/turn #794, and left-side lights/horn #792.
2. The “US” version was also for Great Britain (GB) and Switzerland (CH). 12V 60W magneto #2002. Turn signals. There is extra equipment for a brake light. Two handlebar switches, right-side engine stop #2112, and left-side lights/horn/turn #2111. These are CEV? integrated black plastic switches that fit into the all-black Domino controls. 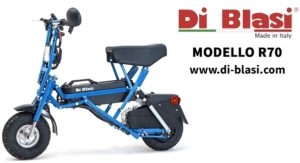 The Di Blasi R70 is electric. Instead of a gas tank it has a long detachable battery.

This entry was posted on Wednesday, August 21st, 2019 at 6:44 am and is filed under Di Blasi parts. You can follow any responses to this entry through the RSS 2.0 feed. Responses are currently closed, but you can trackback from your own site.