Fuel Valve (on tank): On or near the bottom of nearly every moped gas tank is a “petcock” or “gas valve” that has a lever or knob for manually shutting the fuel supply off, for when the bike is stored or transported. The reason for the shut off valve is gravity. Moped and most motorcycle gas tanks are higher than the engine and use gravity to move the gasoline out of the tank, instead of a fuel pump. The higher the liquid fuel level is above the carburetor, the higher the fuel pressure will be. If the the tank is too low, or the carb too high, no gas will come out, or it will even flow backwards. Everyone knows that liquids only flow downhill.

Vacuum Petcock (on tank): On most modern scooters and motorcycles the fuel valve is an automatic type, operated by the vacuum from the engine. When the engine stops, or whenever the suction in the vacuum line stops, the petcock shuts the gas off. 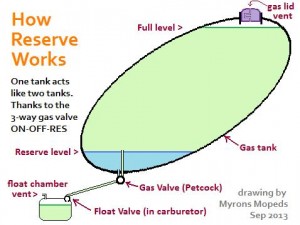 Float Valve (inside carb): In addition to the fuel valve, there is an second device, called the float needle or float valve, in the carburetor that shuts off the gas supply automatically. On a new bike with a new carburetor and clean gasoline, the float valve works all the time, so there is no need to turn the gas valve off after each use. On most old mopeds, the float valve leaks sometimes, and needs the operator to manually turn the gas valve off after each use to prevent gasoline from leaking out.

On-Off-Reserve: Besides turning the gas on and off, most gas valves also have a third position called “reserve”. Reserve is for when the tank is very low on gas. A little tube 1 or 2 inches long sticks up from the gas valve, inside the tank. When the gas is on “ON”, it exits from the upper end of the tube. When the level of gasoline drops below the tube, no more gas comes out, and the engine dies. This is called “hitting reserve”. The operator then switches the gas valve to “RESERVE”, which make the gas exit from the lower end of the reserve tube, at the very bottom of the gas tank. There is about 5 or 15 miles of gasoline available on reserve, enough to find a gas station. If a gas tank  has rust crumbs, powder, or water droplets at the very bottom, it is better to not use the reserve because it lets dirt get through and will clog easily.

Bolt-on: Most modern motorcycles use the bolt-on design, where the tank has two small threaded 6mm bolt holes spaced about 30-35mm apart, with a 10mm main hole in the middle. A race track shaped rubber ring provides the seal. Angel (made in Taiwan by Tym) is the only pedal moped with a bolt on fuel valve. For some reason, bolt on fuel valves are rare on mopeds, but common on motorcycles.

Screw-on: Almost all mopeds use the screw-on design, where the tank has either a hole with internal threads, (female tank) or a fitting with external threads (male tank). Screw-on fuel valves do not seal at the threads like pipes, but rather have a sealing surface perpendicular to the threads, for a soft paper or plastic washer. They are tightened enough to compress the seal washer.

“Female” screw-on fuel valves for external thread tanks have the ability to point in any direction, because the valve main body does not screw on, instead only the nut turns. The special nut is a “turnbuckle style” in that it has right hand threads on one end and left hand threads on the other. This allows the valve to fit in tight places. It also means the nut has a top and bottom and won’t go on upside down, unlike a regular nut.

“Male” screw-on fuel valves for internal thread tanks also have the ability to point in any direction. When the seal washer is soft rubber and thick, and retained by a metal cup, it seals even when the valve is slightly loose and somewhat free to rotate.

Clamp-on: A third type of gas valve is clamp-on, found on Derbi mopeds with a plastic gas tank. It seals against the tank exit pipe semi-flexible soft plastic walls by o-rings squeezing radially inward by a hose clamp.

Spigot Direction:  L = left    R = right    D = down    B = back  (as you face the valve). Some models have room for more than one spigot direction. Many mopeds can have any spigot direction, because there is nothing near the petcock that interferes with the fuel hose. Then there may be choices. Other kinds are only available in one spigot direction. Sometimes an original valve that was “spigot down” must be replaced with one that is “spigot left”, and a longer piece of fuel line installed. Sometimes, if the valve is angled, and the spigot direction of the replacement valve is uphill, the new valve can affect fuel flow when the gas tank is really low. If it cannot be rotated and angled more spigot level or downwards, then the lower part of the tank will become unavailable when the liquid level reaches the highest part of the fuel line. That is, it will run out of gas prematurely.

Gas valve low cost substitutes:  USA plumbers will recognize that the moped gas valve M10x1 thread is close to 1/8″ (named after the small inner diameter) National Pipe Thread Taper NPT . Because of the taper, a brass 1/8″ NPT (27tpi = 0.94mm) screws on and fits the 10×1 thread OK, because it’s about 9.5mm at first, tapering to 10.2mm. With teflon pipe thread tape, any 10×1 thread gas tank can be adapted with American standard pipe pieces, including shut-off valves. All of those things are sold in home improvement stores nationwide. The good side is those pipe pieces are inexpensive and easy to get. The bad side is they must be cleaned up and re-taped every time they are screwed on and off, and they don’t have any reserve feature.

Gas valve outer seals: Screw on gas valves, unlike plumbing pipes, seal by a soft or semi soft ring, that is squeezed between the gas tank and the gas valve, as the valve or nut is screwed on tight. Plumbing pipes seal by the threads only, and don’t need a flange and soft ring. The sealing surface on both the tank and the valve must be flat and straight. If a gas tank has a damaged sealing surface, then the outer seal might leak, even when the seal and valve are fine. The remedy for a warped, misaligned or scratched sealing surface, on either the tank or the valve, is careful grinding with a flat spinning disk (with all gasoline evacuated).

This entry was posted on Friday, April 16th, 2021 at 5:35 am and is filed under Media. You can follow any responses to this entry through the RSS 2.0 feed. Responses are currently closed, but you can trackback from your own site.