At left is a 1950’s Italian made CEV “All in One” clamp-on switch. “All in One” means all of the buttons in one switch unit: lights, horn, and engine stop. At right is a 1959 Tomos Colibri 4 light and horn switch, polished cast aluminum. In the 1950’s and 60’s Tomos and Puch mopeds were the same. Tomos Colibri was a Yugoslavian “remake” of the Austrian made Puch MS50 series (sheet metal 50).

These are shown for information, not for sale.

Most 1950’s-60’s mopeds had an “All in One” type switch, either CEV, Aprilia, or others, mounted on the left handlebar.

Universal Clamp-on Engine Stop Button – Right Side
609-1451  $12  Switch assy, momentary contact, press to “kill” engine
(can also be used as a horn button)
This is a low cost substitute for the original engine stop switch.
Pushing the button grounds the ignition wire, stopping the engine.

Merit late 1960’s “Rectangular Chrome” All-In-One – Left side
$25  Cap only
Merit Werke began in Germany 1966, then later moved to Malta, in the Mediterranean.
They still make automotive switches, with the same MW logo, but with the name Merit Malta.

Merit late 1960’s “Rectangular Chrome” Engine Stop – Right side
$20  Cap only, says “ON   OFF   OFF”
These older or non-US caps interchange with the newer US-compliant caps.

CEV 8042 “Diamond Chrome” Lights/Horn Switch – Left Side (or R)
8042     N/A   Switch assy with partial mount, set screw connections
Use with Domino “Diamond” controls, or drill holes in handlebar, to mount directly.
Use CEV 8176 below as a substitute.

CEV80??   $20  Switch, says “CEV 188“, without mount, with set screw connections
Use with Domino “Diamond” controls, or drill holes in handlebar, to mount directly.

Mopeds (motorized bicycles) had less strict equipment laws than motorcycles did, and still do. They don’t need to have turn signals, or a permanently-on head light. The US DOT equipment laws dictate what the switches do, what they say and where they go. Engine stop always goes on right, reachable by right thumb. Lights and horn are reachable by left thumb. In the 1970’s US DOT compliant switches had English words. After the mid 1980’s US DOT allowed international icons.

1 HI-LO-OFF  HORN  $18  used, tested
2 LO-OFF-LO HORN  $8  used, tested
The spring gets weak, and/or the rivet gets rusty. On most bikes, that just makes the horn weaker, but on a ’77-later Puch, that causes the horn to stay on slightly all of the time (so does a loose clamp).
3 ENGINE RUN-OFF   $5  used, beautiful
Merit caps have highly polished high quality German chrome.

Integrated controls means the electrical buttons and switches are part of the twist throttle and hand levers, rather than separate. The purpose of integrated controls is to locate the switches close to the operator’s thumbs, for increased safety and convenience, and to reduce cost and save space on the handlebar. Motorcycles had this first, because they have more buttons, generally. While the European switches below can be replaced separately from the controls, with most Taiwan and Japanese mopeds you had to buy the whole control assembly to get new switches and buttons. More on that will be in the Taiwan Mopeds parts department.

By the end of the 1970’s, the shape of pretty much everything from toasters to automobiles, that used to be rounded, was straight. Many things that were metal became plastic. On Garelli mopeds, the all curved Garelli “Oval Chrome” switch shape was modernized to CEV “Diamond Plastic”, with the same 36mm bolt spacing. The new design was much stronger and more resistant to breaking, because the sliding switch had a large platform that almost touches the base. The newer “knobs” are low and wide, not tall and thin.

CEV 8194   “Diamond Plastic” Engine Stop Switch – right side (or L)
8194      N/A  Switch, without mount, with solder connections
Was sold new without wires, which had to be soldered on skillfully.
Use with Domino “Diamond” controls. takes two M4 x 15 metric screws.
Or drill holes in bar, to mount directly, using the “Diamond” Direct Mount.

CEV 8193   “Diamond Plastic” Lights/Horn Switch – left side (or R)
8193      N/A  Switch, without mount, with solder connections
Was sold new without wires, which had to be soldered on skillfully.
Use with Domino “Diamond” controls. takes two M4 x 15 metric screws.
Or drill holes in bar, to mount directly, using the “Diamond” Direct Mount.
Use CEV 8176 above as a substitute.

There were not many US-model mopeds in the late 1980’s, other than Derbi, Garelli, Jawa, Tomos, Trac (Daelim), pretty much. Except for Jawa, they all used late 1980’s black Domino controls with fully integrated switches. 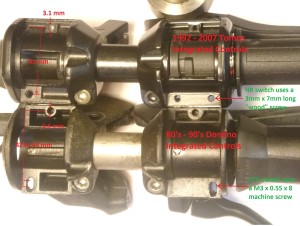 Icons appeared first on US mopeds in 1985 on Trac/Daelim, then in 1987 on Derbi Variant Sport and DS50. In the 1980’s the world somehow realized it made more economic sense for motorcycle switches to use symbols, with one version for all, rather than using words and having to make many language versions. By the 1990’s the US had switched to icons, at the time when Tomos and Jawa were the only European mopeds remaining. There were several “remakes”: Kinetic (India) is like Vespa/Piaggio, Manet (Slovakia) is like Puch, Hero (India) is like Puch, and others. Some of those copied “80’s – 90’s Domino” controls. These HR (Hidria Rotomatika) switches below do not interchange with Domino. The HR switches are slightly smaller than Domino, and their top peg is smaller. HR switches must go on HR controls, aka “1992-2007 Tomos” controls.

Put away that soldering iron. The new century brings wires pre-soldered by the factory, with a convenient multi-pin plug.

High quality long lasting switches and controls at half the price of Italian. They’re as good, or better.

On most mopeds of the 1970’s and 80’s (except Motobecane, Jawa, and Asian-made ones) there were two kinds of brake light switch. They were both made by CEV. They both screwed into the brake lever perch/mounts on Magura, Domino, OSL, and PV controls, where the button of the switch is pushed by the edge of the hand brake lever. They both have the same physical dimensions and appearance, except for the color of the tip/button. The black button brake light switch was “normally open” when installed, and became “closed” when the brake was squeezed. The white or brass tip brake light switch was “normally closed” when installed, and became “open” when the brake was applied.

What is confusing is that, unlike most momentary switches, the button (tip) is always being pushed in 99% of the time. Only when the brake is applied, is the button released. So a switch that is normally open when it is installed on the bike, is normally closed when it is off the bike in your hand. And visa versa. That is why the words “when installed” are added to the switch description.

Generic “normally-open-when-installed” brake light switch
9343G     N/A  new  (closed when button is released out)
This is a generic copy of a CEV 9343. Looks good but many were bad.

Generic “normally-closed-when-installed” brake light switch
9342G    N/A  new  (open when button is released)
In the mid 2000’s these were made correct, like a white tip CEV.
But later ones functioned like a black tip CEV, the opposite way.

Generic “normally-open-when-installed” brake light switch
635022     $12  new  (closed when button is released)
These have a white tip but function like a CEV black tip.

All four of these switches are the same. Just the wires are different.