Motron (Motron S.p.A.) was founded in Modena, Italy in 1961 by Eduardo Po, when he took over Moto Romeo. Romeo made competitive sport bikes with 50cc 15hp Minarelli shifter engines, plus mini bikes and mopeds with Minarelli V1 50cc 1.5hp automatics. in the 1960’s and 70’s. In 1976 Eduardo’s sons Ermanno and Adriano took over, modernized the company, and changed the name from Romeo to Motron. (First they wanted to use “Motrom” which is short for Moto Romeo. But then they made the “m” an “n” so it would sound different from “Motom”, an established brand). Motron made excellent Minarelli powered tuboni from the late 1970’s to the end of the 1980’s, such as the popular 50cc 4-speed liquid cooled GL4.

In early 1978, Motron Corporation of America, in Palos Verdes, California began to import and distribute Motron mopeds to USA moped dealers. They made up the wavey stripes, the name Medalist, and the “Gold Medallion Moped Service” logo. 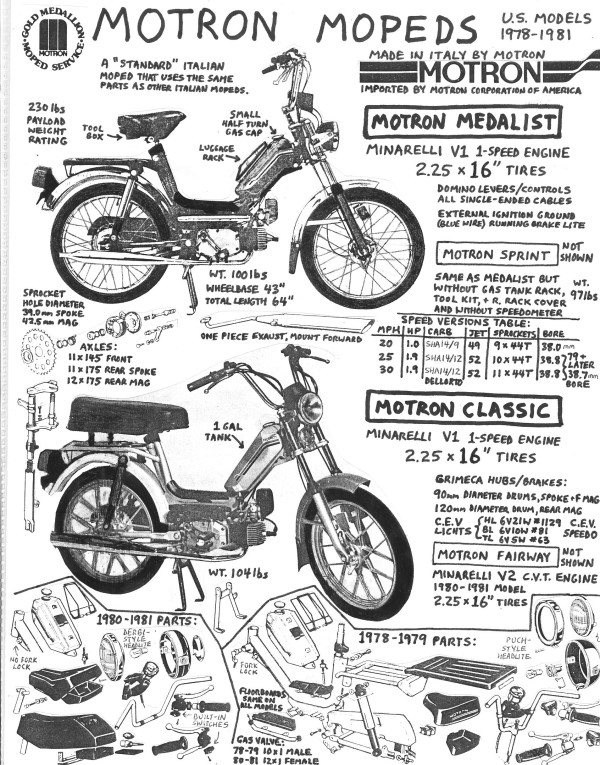 This entry was posted on Friday, July 13th, 2012 at 10:36 am and is filed under Motron Parts. You can follow any responses to this entry through the RSS 2.0 feed. Responses are currently closed, but you can trackback from your own site.